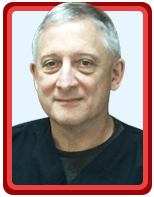 Dr. Richard Saran was born and raised in Buffalo, NY. He attended Arizona State University where he received a B.S. degree in Microbiology in 1982. He continued his education at Loyola University School of Dentistry and received his DDS in 1987.

Dr. Saran knew from a young age that he wanted to be in the healthcare field. During a pre-healthcare internship in college, he developed a special interest in dentistry. After graduating from dental school he worked with the Indian Health Service in the Oklahoma area and also North Central Montana where he earned an isolated hardship ribbon.

Prior to joining our team at General Dentistry 4 Kids, Dr. Saran had spent the majority of his career working at a health center in Casa Grande, primarily with children. As a board member of the First Things First Pinal Regional Council, he successfully helped the health center obtain a grant from First Things First and implemented a mobile dental clinic.