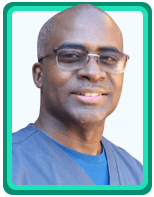 Dr. Kevin Givens was raised in Chicago, Illinois. He chose to become a dentist because he enjoys the art and science of Dentistry. He attended Xavier University of Louisiana where he received his Bachelor Of Science degree in 1987. He continued his education at Meharry Medical College in Tennessee and received his DDS in 1991.

In his spare time. Dr. Givens enjoys time with his wife, son and daughter and their pet dog, Charlie. He also enjoys art, specifically drawing.