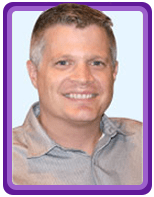 Dr. Aaron Kamp was born and raised in Northern California before moving to Flagstaff where he earned his BS in Nursing. After moving to Tucson in 1997 he began working at UMC and worked in the pediatric departments until he decided to go back to dental school.

During this time he meet his wife who is also a nurse in the pediatric department at UMC and we have had 2 children, Emily and Evan. After spending 4 long years in Buffalo, NY, he and his family were extremely happy to move back to Tucson where they like to hike, ride, go camping, and play soccer.